Thanks to van de Loosdrecht et al (2018) we were able to see the ancient Iberomaurusian, or Oranian people. Not only that, but we see genetic continuity into the Capsian culture, from Fregel et al (2018). I think this is very important to consider as an option for a potential source of this gene flow from North Africa.

I believe this is important due to the fact that Iberomaurusians contain Y-DNA E-M78, and a precursor to E-V13, which is often seen by people as originating in Europe. How it got there has been the big question, and I think this may be the answer. Not only that, there could also be some female-based flow considering that there is J1c, T2b, and H1 among Iberomaurusians (Kefi et al, 2016) and European farmers, but not in Anatolian farmers.

As far as ancient samples, there is E-M78 among Sopot and Lengyel remains, as well as E-13 in Croatia Cardial and the Iberian Cardial. With that in mind, it seems that a mixing in the Balkans and disbursement from there is a more probable option.

I first performed D-stats with European and Anatolian farmers to see if there were any stats that jumped out. While these stats are not largely significant, it does seem that additional flow from Levant_N is not the source of this extra affinity. In fact, even within groups of these farmers, some had Z-scores > 3, in extra affinity to Iberomaurusians, without any significant score with Levant_N. The Bulgarian Early Neolithic samples I0704, I0706, I1298, and I2521 from Mathieson et al (2018) appear as the group with the least affinity to Iberomaurusians, without losing any affinity to Levant_N as well. There are some farmers that will approach or go over a Z-score of 3, but they are the minority. (The relevant D-stat sheet can be found here: https://docs.google.com/spreadsheets/d/1Ohg_6ZHul7PTSMk3vsdm0o0M5qn4ul79FV0rRfnWeIM/edit?usp=sharing )

The first sample that I looked at was Croatia_Impressa 1 and 2, which are samples I5071 and I5072, respectively. The first look here is with Croatia_Impressa I5071. This output showed that this sample can be modeled effectively as deriving about 97 percent of her ancestry from a Bulgaria_N-like source, and another 3 percent from Iberomaurusians.

This next sample, I5072 was also effectively modeled in the same way as I5071, with 3 percent input from a source like the Iberomaurusians.

qpGraph models for input to Iberia_EN

For Iberia, things are more complicated, with WHG input to these samples. Using Levant_N seemed to help in samples with extra WHG, so that they do not end up becoming something like 40 percent Bulgaria_N, 25 percent Iberomaurusian, and 35 percent WHG, or Iron_Gates. The two samples that I used here, Iberia_EN1 and Iberia_EN2, are samples I0409 and I0410.

The first graph here is for Iberia_EN I0409: 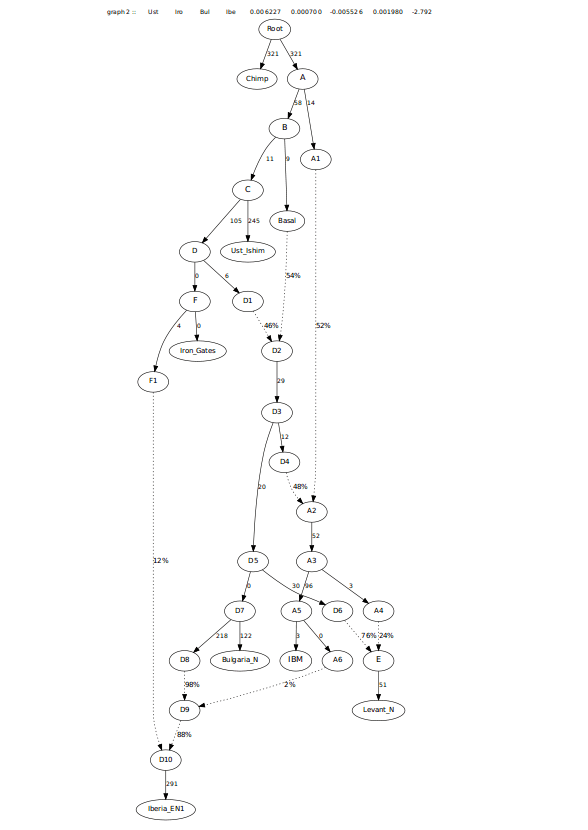 The next graph is for sample Iberia_EN I0410:

qpGraph models for input to LBK_Austria

The samples chosen here, LBK_Austria2, LBK_Austria4, and LBK_Austria7 are samples I5069, I5204 and I5207. Since they have some extra affinity to Iron_Gates, they were also modeled in the same way as Iberia_EN. I5069 is the first sample that I graphed. 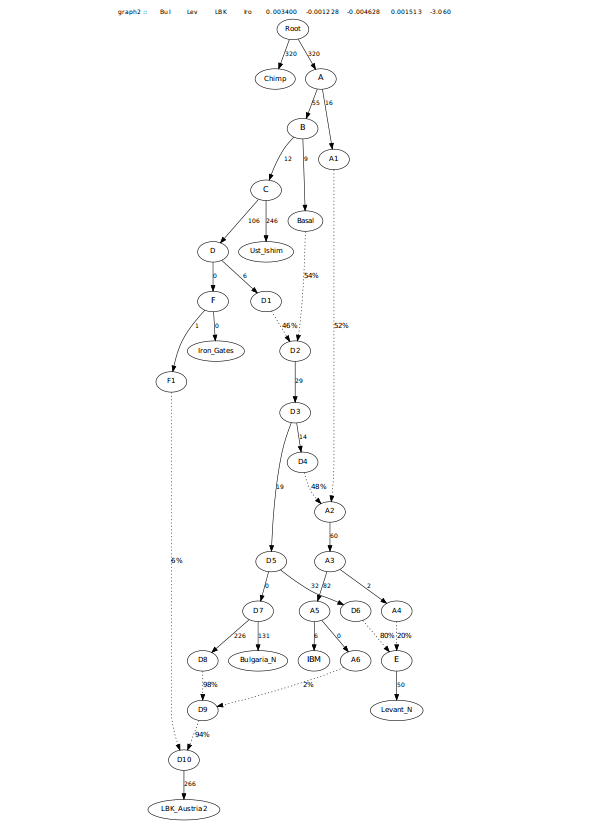 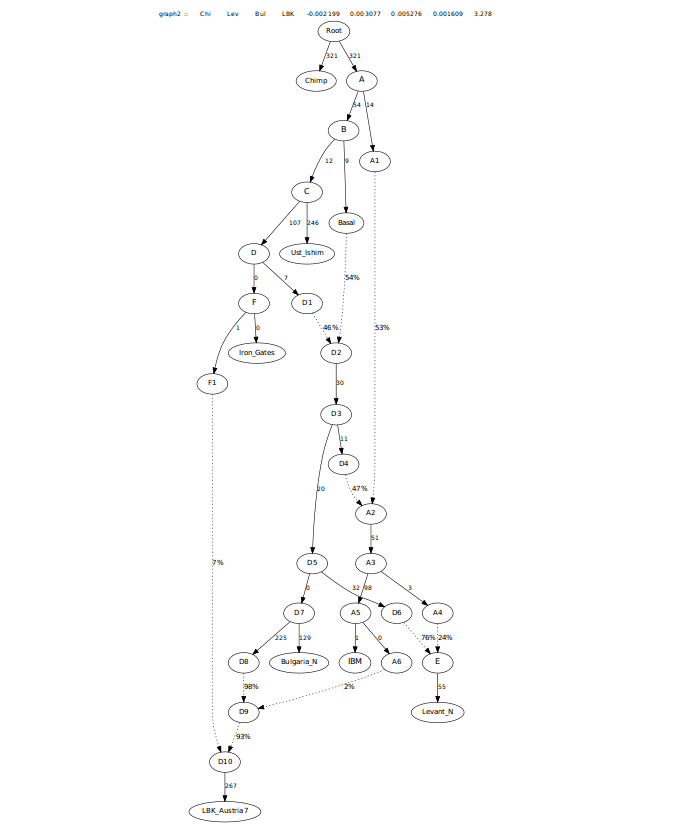 These three samples, with significant and near significant scores towards Iberomaurusians, are all three pretty similar in ancestry proportions as well.

qpGraph models for input to LBK 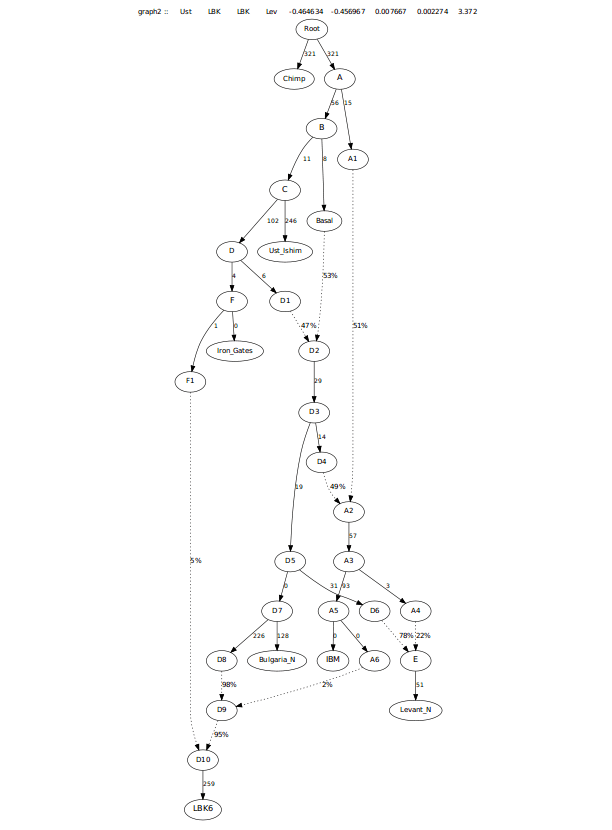 qpGraph model for input to TDLN (Lengyel and Sopot samples)

The sample that stuck out for analysis was TDLN3, or sample I1891. 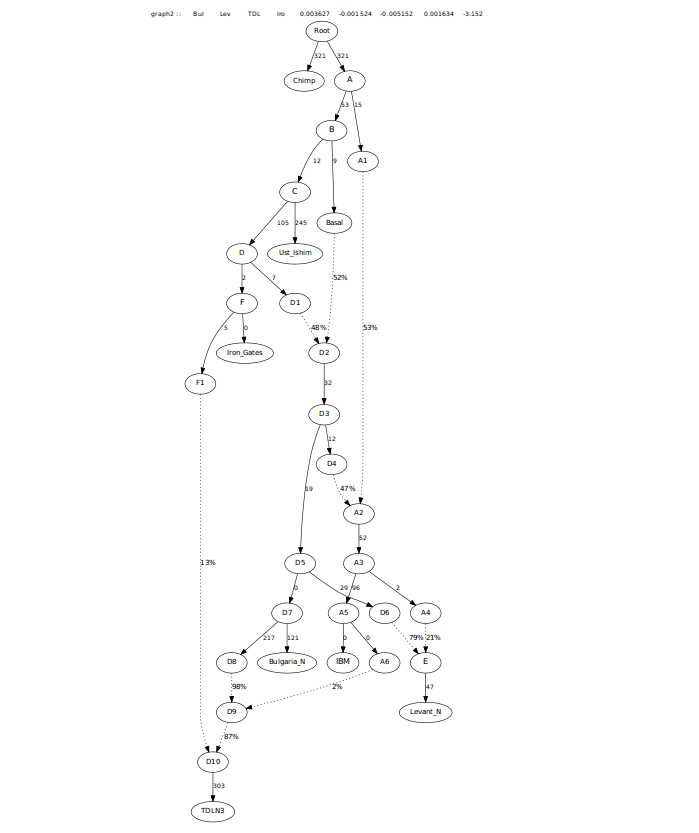 While not having any significant input, the appearance of E-M78 is for some flow from a source related to or more enriched for Iberomaurusian ancestry.

qpGraph models for input to Sopot_LN

While these results are providing nothing that one might consider mind-blowing, it does open up a few options. With the only ancient instances of E-M78 being in ancient NW Africa, it is hard to say what was going on between there and the Levant in the Neolithic, as pastoral societies began to emerge. Direct flow from around Morocco or Algeria to the Balkans might be a bit harder to imagine that coming from potentially earlier Neolithic groups in Libya or possibly Egypt.

There is also the chance that the Levantines that mixed into the ancestors of European farmers may have had extra contacts with North Africans before going to Anatolia. Not having an ancient population that looks like a good fit as a direct source to Europe makes this a little harder to decipher.

The clear lack of Y-DNA E throughout Anatolia, but not in Europe is suggestive of extra contacts. The D-stats and graphs to point to potential contacts between the early farmers of Europe and North Africans. Nothing is really conclusive here with regards to how that flow happened, but the uniparentals and specific drift with Iberomaurusians came from somewhere outside of current potential sources, other than the Iberomaurusians themselves.

Fregel et al (2018) Ancient genomes from North Africa evidence prehistoric migrations to the Maghreb from both the Levant and Europe. https://www.pnas.org/content/115/26/6774

Lazaridis et al (2016) Genomic insights into the origin of farming in the ancient Near East. https://www.nature.com/articles/nature19310