The spread of the Afro-Asiatic language family is an argument that has several viewpoints. Some might say that it originated within Northeast Africa, and some that think it spread from the Near East.

With all this in mind, I decided to try a few different runs myself, including several ancient pops. This included the Levant_N samples, Levant_BA, Iberia_EN (As V88 in North Africa may have a Neolithic origin), Malawi_Chencherere_5200BP, Mota, Iberomaurusians, and South_Africa_2000BP.  I also used the new v37_1240K_HumanOrigins set from Harvard for another run.

This first graph here is a little more complex, with several populations being used. It would appear that most of the ancestry of Tanzania_Luxmanda_3100BP comes from the Levant_BA, and a source related to the Malawi_Chencherere_5200BP samples which may represent mostly local ancestry from Tanzania.

This next set-up included most of the samples and had the initial most-significant, worst Z-score with Iberia_EN. Branching them off of Iberia made me have to look for negative statistics with Africans and it built from there, eventually requiring good admixture from the BA samples from Jordan. Even with the Iberian-related admixture, Jordanian-related input was still the most-significant single source. Interestingly, South African input is still required in a decent amount.

The last two graphs here were done using the new v37 set from Harvard. I also included South_Africa_2100BP.SG samples in this first run. This more simplified graph from the v37 set was even more significant in the amount of input from a source related to the EBA samples from Jordan, and South African-related input was still strong. 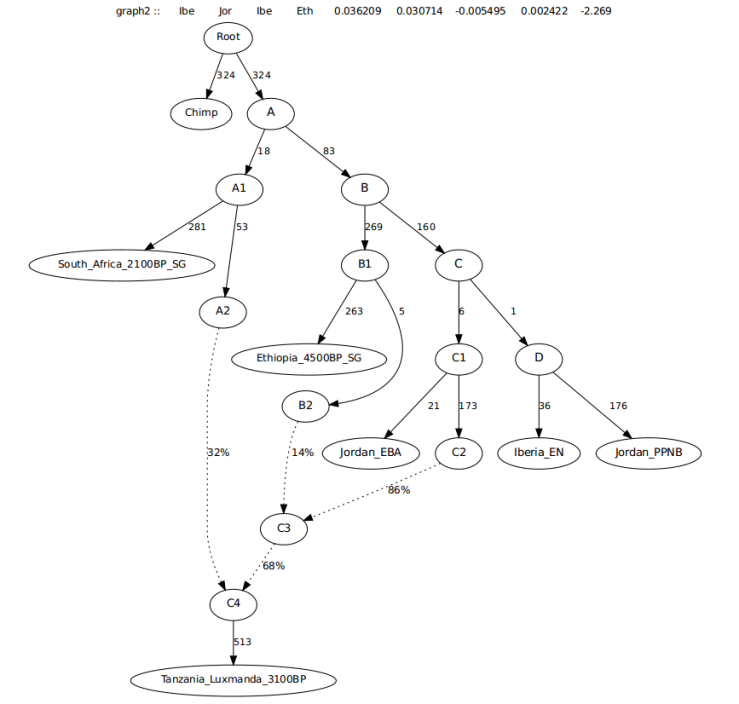 For this last graph on the v37 set, I switched back to South_Africa_2000BP to see if there were any differences. In this run, the amount of Levant_BA-related input returned to levels more consistent to the other runs, but South African-related input dipped significantly in exchange for more from a source related to Mota.

Just out of curiosity, I decided to look at the oldest Egyptian samples from the New Kingdom period. This sample is of very low coverage, so extreme caution is urged on the interpretation of this output. Once again, there was a need for European farmer-related input to account for the ancestry in this sample. Also of interest was the fact that Dinka was a preferred population for Sub-Saharan input, over Mota. This may have interesting implications as a minimum date for the appears of N-S speakers into the Nile valley, but again, caution is needed here. In this run, Levant_N does make an appearance, along with a very significant input from a source like the BA samples from Jordan. 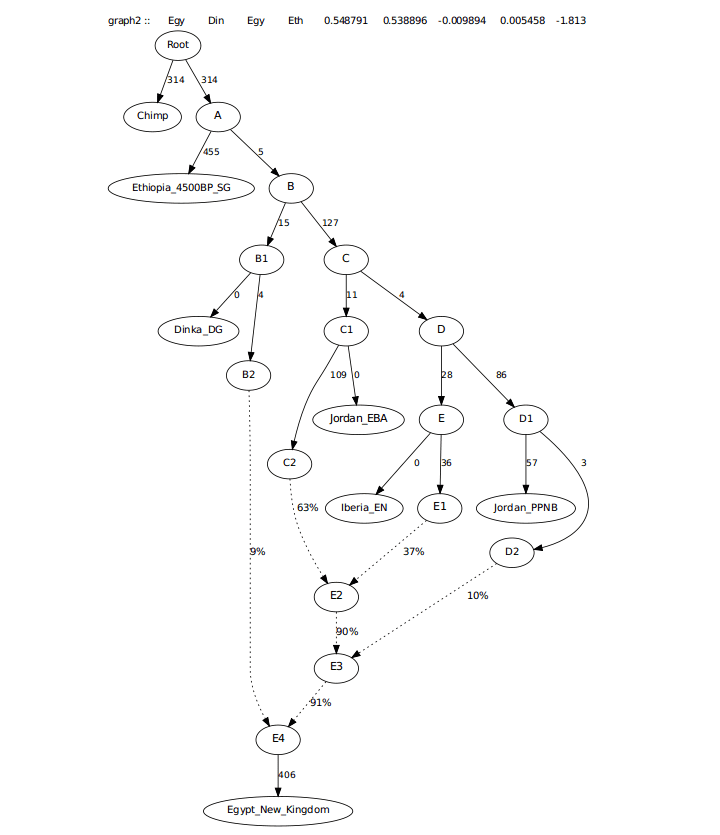 While I am getting differences in the West Eurasian input than was found in Skoglund et al (2017), the sources are still very related and I am also using the full 1240K and V37 sets, versus using a more reduced set from panel four and five from the Human Origins set. I think that input from a source that could have both Levant_N and Levant_BA input is quite plausible, and until we have Neolithic genomes from Egypt, it is hard to say how real any request for ancestry from European farmers is. The entrance of V88 to Africa is still a mystery, for now.

The large preference for input from a source more like Jordan EBA, rather than Levant_N may have interesting implications in the spread of Afro-Asiatic, but, as always, more sampling is needed before jumping on the bandwagon here.

As I work forward and dig deeper into Africa, I will possibly revisit this post and see how any output changes. I may also search for outgroups that were not used in Skoglund et al (2017), to see how any output I get from qpAdm may differ from the paper. With any luck, more samples from ancient Africa will help give answers to some of these questions, rather than raise many more.